Shaking up my fitness routine is always a good idea – it stops me making excuses not to exercise and keeps things more exciting. So when I had the opportunity to review a new class, I thought it could give me the kick up the butt I need to get my body into shape in time for flaunting my festive finery!

Project Fit takes place in a purpose built studio in the heart of the City (on Cornhill) and is the brainchild of experienced Personal Trainer Joel Hilton and co-founder Ben Staines who wanted to bring their blend of cardio and body transforming exercises to the flourishing High Intensity Training (HIT) scene.

Walking down the stairwell to the gym, there are signs saying ‘You Vs Your Body’ written in big red and black letters along with red zig zag heart monitor lines and thunder bolts. It looked a little serious and I wondered whether I should turn back and pop over to Starbucks for a coffee and muffin instead. But I’m glad I didn’t as there was a great little shake bar in the reception area called the Filling Station which, for £3.50, whizzed me up a delicious Strawberry Sensation protein shake. Not quite the caffeine boost I’m used to at that time of the day but it was tasty!

The first thing I noticed as I walked into the studio was how masculine it felt. The smell of rubber from the large black, rubber floor tiles was pretty strong and what looked like metal scaffolding poles sectioned off the cardio platform from the floor exercise area while industrial looking lights hung from the ceiling. I also noticed a DJ box opposite the treadmill platform and found out later that some of the evening classes take the clubby vibe up a notch with an in house DJ. It looked very cool and hardcore – unlike me – but I felt less out of place as more girls came in …even though I was old enough to be their mum!

After filling out a health consultation form, trainer and owner of Project Fit, Joel came in looking the epitome of a fitness professional – his honed physique is a glowing testimonial for his studio workouts! While he briefed us about the class and its intensity, I started to feel my legs wobble before I’d even stepped on the treadmill – it sounded challenging and I’m glad I opted for the 35 minute session rather than the hour.

Hitting the go button on the treadmill, I started walking as the high octane music began to pump, the studio lights dimmed and the coloured lights glowed. Joel then shouted out three numbers relating to the speed levels we should choose to run depending on how fit we felt – I went for the lowest (of course I did) figuring I could always up it if I felt brave enough! He then called out three higher numbers which meant moving up 2 more levels until I was now jogging at quite a pace. Phew! Once the warm up was over, I was already feeling a bit puffed – my jetlag wasn’t helping – so when Joel shouted “Now here’s where we really get moving!” I knew I was in for a tough 15 minutes. During this treadmill section, Joel called out every minute or so instructing us to change speeds and incline, until, at the end of the treadmill section, we were running at our fastest and highest incline. It was harder than I was used to but I kept going – I wasn’t going to let my age be an excuse to stop me keeping up!

While we ran Joel urged us to keep our shoulders back and pull in our abs and it was good to be reminded as at the final minute the only thing I could concentrate on was being able to breathe! Thankfully it was soon time to grab my water bottle and glug away before moving down to the floor for the 15 minute exercise section which involved squats and jumps on a half ball, planks, and arm, back and core exercises using straps which were attached to the poles. It was really tough but I kept thinking of the calories I’d consumed from the massive American breakfasts on holiday and imagined them disappearing with every squat. And this class is said to burn up to a whopping 700 calories!

Finally we got back on the treadmill for the last 5 minutes with 30 second sprints which moved up to the fastest speed we could cope with at the highest incline. All the while Joel called out, motivating us to push ourselves to run harder and keep going. The relief when he told us to hit the stop button was tremendous! 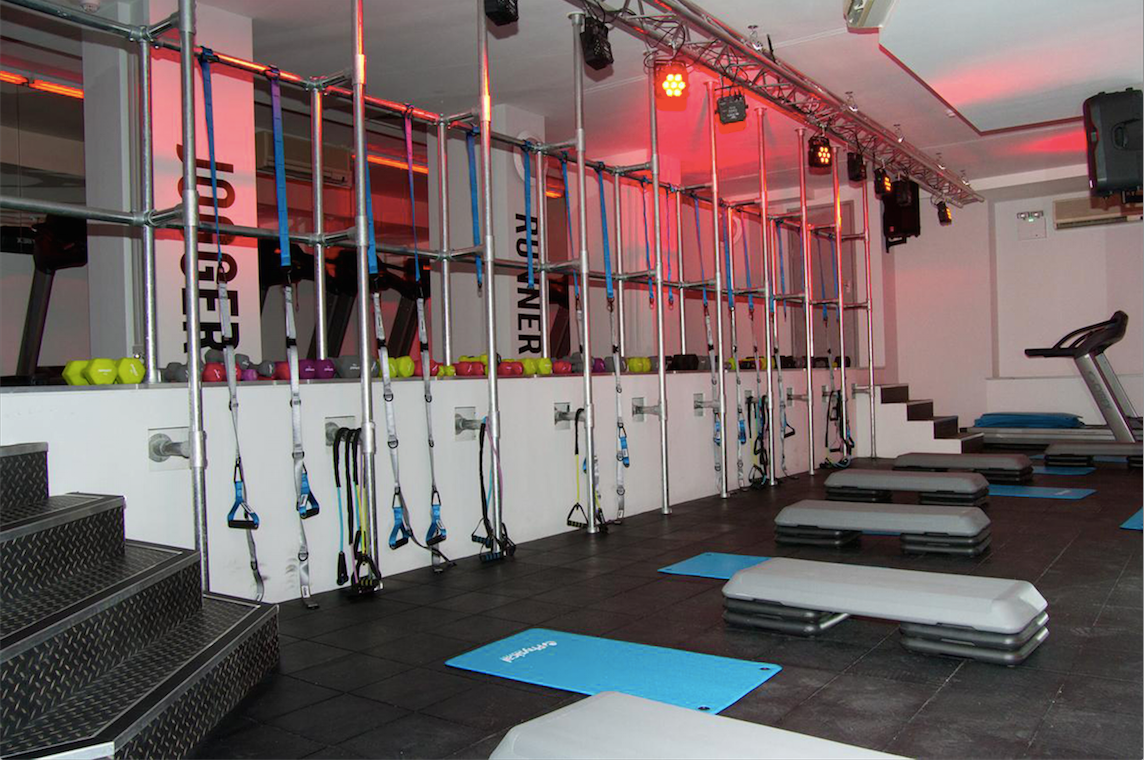 Although I was dripping with sweat and found the session harder than I’d expected, I felt quietly smug that this workout would keep my body burning up calories for at least the rest of the day…even if it meant I couldn’t actually walk for the next two days!

My verdict is that if you’re unfit or haven’t exercised for a while you would need to start off walking and ignore those gym bunnies around you going at full pelt. I felt I had to keep up because I’m a bit competitive like that but if I decide to do a few more classes in the future, I’d take it at an easier level to begin with and that’s exactly what the instructors recommend. It’s a definite endorphin pumper and your body and your mind will feel clearer and stronger afterwards. I felt happily exhausted afterwards but as bright as a button and I might just return for another class!

I'm Lisa Barrett, 53 former beauty editor of Cosmo and Woman's Own and currently a copywriter and content creator for beauty and wellbeing brands. I'm navigating midlife with a smile on my face and hope in my heart because it's not all downhill from here - ladies, we're just beginning! Follow me for positive midlife inspiration and fast, fab beauty and health fixes. It's our time to shine ✨

END_OF_DOCUMENT_TOKEN_TO_BE_REPLACED

Sunday vibes ✨
Hi from me with a wonky picture from my birthday last week - that cheeky glass of bubbles in my hand isn’t today’s breakfast! 🥂🥂
Life has been full on and I can’t believe I summoned up the energy to write an actual blog post yesterday (was it the Lion’s Gate moon thingy influencing my energy? Who knows?!) But you can read it by clicking the link in my profile if you like…
Hello lovely people! Happy Friday 🌻
As a beauty journo and Face Yoga teacher, I’m a massive skincare junkie as you might well know, but lately I’ve been fixating on makeup and wondering why I seem to have fallen out of love with it.
SHE’S GLOWING HOME…✨✨✨