Over the past couple of years, I’ve often asked myself whether it’s time to have a little Botox. But even though my crow’s feet are multiplying faster than Danny Zuko’s chills in Greece and the crinkles on my forehead can no longer be convincingly veiled by light reflecting makeup, I’ve yet to succumb to a syringe of the smoothing stuff.

Just before Christmas when my skin was at its most wintery (read: pale, dry and lacklustre) it got to the point where I spent my spare time looking at before and after pictures of Botox treatments . Those unlined foreheads and youthful, perky eyes had me at breaking point when comparing them against my folds and deepening wrinkles, so it was perfect timing when I got a call from Miss Sherina Balaratnam asking me to trial Radara – a much hailed breakthrough in targeted skincare. Exciting!

S-Thetics in Beaconsfield is one of the first UK clinics trialling Radara, so Sherina was as excited as me. The fact that I’d never had Botox but was at that ‘should I, shouldn’t I’ stage, apparently made me a perfect candidate to trial this new, at home treatment, as I could decide whether Radara delivered good enough results to keep me away from the needle for even longer. Here’s how I got on…

The stylish looking box that contains the Radara skincare system was a treat in itself – ‘totally Instagrammable’ – so my girls told me! After my initial consultation with Sherina to check on the current depth of my crow’s feet and to be shown how to use the system correctly, I left S-Thetics clutching my ‘special box’ and took lots of pictures of it while smiling inanely and hoping the contents of said box would work magic on my crinkles. 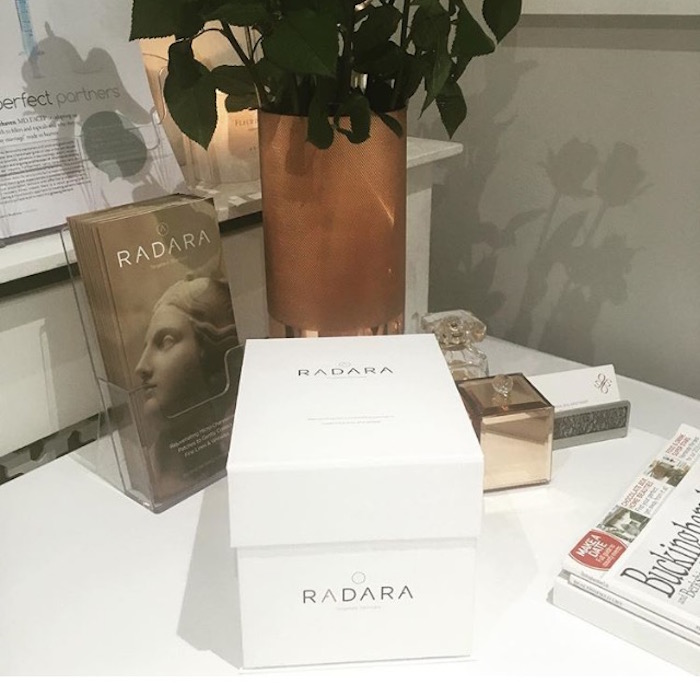 The skincare system consists of flexible patches coated with tiny microscopic plastic ‘needles’ less than half a millimetre long and a pump bottle of high-grade pure hyaluronic acid (HA). If you haven’t heard of HA, let me tell you, it is a big buzz in the skincare industry and you’re most likely to find it in products aimed at the over 40 age group. HA is a naturally occurring sugar found in the body, which, like anything that’s holding us firm and tight, sadly reduces as we age. Depletion of HA is one of the main reasons we lose that youthful glow, natural elasticity, hydration and support. So, Radara figures that by replenishing HA levels using this targeted method, skin health can be restored and wrinkles softened.

HOW TO USE IT

The Radara trial lasts for four weeks and patches are designed to be used around the eye area once a day – I used it in the evening before bed after cleansing and moisturising. Patches are placed on the skin and gently pressed so that the ‘needles’ create hundreds of tiny micro-channels. Although this sounds a bit painful, it isn’t at all – it’s just feels slightly prickly. Then, after smoothing on a pump of hyaluronic acid, the patches are placed back on the skin for five minutes to allow the serum to penetrate.

As a self-confessed sloven, I wondered whether this extra skincare step would become a hassle and wind up going by the way side, but actually, I came to look forward to my five minutes of Radara time! It was time for me to be still and quiet (it’s best not to move the face while the patches are doing their thing) and I found it an enjoyable part of my day, marking the start of a wind down routine.

Even though my trial took part over the festive season, I’m pleased to report that any excess of alcoholic bubbles and partying didn’t cause my nightly routine to slip and my patches went on every night for five minutes, without fail… Though I do admit to waking up and finding used patches stuck to my foot on a couple of occasions!

The results on my eyes over the first two weeks were unremarkable – my skin felt slightly more hydrated but that was all. Just when I started wondering that perhaps I wasn’t ‘doing it right’ I noticed a change! There was a definite softening of wrinkles in the third and fourth week alongside a brightening of the area. When my face was static, the crow’s feet were almost non-existent.

On my final visit to check on wrinkle depth, Sherina was impressed to note that there was a definite plumping up of lines around the eyes from my initial skin analysis and I was pleased with glowing compliments from friends and family about how refreshed I was looking. I felt that I looked ‘well’ and my crow’s feet were minimal and definitely improved.

Discussing my results with Sherina, we both felt that the Radara system would be ideal for somebody who is opposed to Botox or, like me, isn’t sure they’re ready to go that route yet, but is after a way to reduce lines in a natural, subtle way.

Although the wrinkle reducing effects of Radara may not be as dramatic as they would be with Botox, my wrinkles still improved considerably more than with any eye-cream that I’ve used over the same amount of time. The effects of Radara are said to last for up to three months and, a month on, I’m still less crinkly than before the trial.

I’ve decided to hold off from Botox for now and just hope that Radara decide to bring out patches that can be used for other areas such as the forehead, chest and lip area. Watch this space!

A month supply of Radara Targeted Skincare costs £199 and there is lots of information here on their website.

For more information on S-Thetics in Beaconsfield, visit their website here.

You may also enjoy:

I'm Lisa Barrett, 54-year-old former beauty editor of Cosmo and Woman's Own currently working as a freelance public relations consultant, copywriter and content creator for beauty and wellbeing brands. I'm navigating midlife with a smile on my face and hope in my heart because I truly believe it's never too late to follow your dreams! I like to share positive midlife inspiration - I'm all about keeping it real and look for fast, fab beauty and health fixes which make us 50+ women feel confident in the skin that we are in. It's our time to shine ✨

END_OF_DOCUMENT_TOKEN_TO_BE_REPLACED

Hi all! There are so many wonderful midlife women and medical professionals here on Instagram sharing their advice, offering support and making us feel part of a club – hot sweats and mood swings might be part of the membership – but isn’t it great to know we are not alone?
Happy Easter weekend everyone - hope you’re enjoying the beautiful weather! 😎
Morning! Today I’m posing a question: WHO ARE YOU NOW? Gosh. That’s a humdinger isn’t it? No longer a child, a young adult or even ‘just an adult’ – for me, I’m more of a midlifer on the cusp (at nearly 55) of tipping over to the ‘geriatric patient’ title that the medical professional so thoughtfully give to 60-year-olds, - despite the fact that most 60-year-olds I know have more verve in their little fingers than some young ‘uns.
This is the happy, sweaty face of a woman (me!) who had a lot on her plate this morning - and I’m not talking about breakfast.
Oh what a week it’s been! I’ve been doing my favourite thing and have been busy with words - working on content for a new client @illumin8beauty - I’ll be telling you more about this fab salon and their gorgeous treatments because I know a lot of my lovely midlife followers enjoy a bit of beauty news 💅🏽 💆‍♀️
When I sit down to work on my novel (Say what? Yep, you read it right – pop to my last post if you need an update) it feels like such a humongous task that I need to keep reminding myself of the quote -